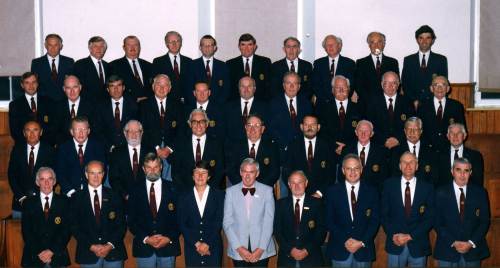 The Choir in 1993
​The International Festival 2015 - The Stithians Times 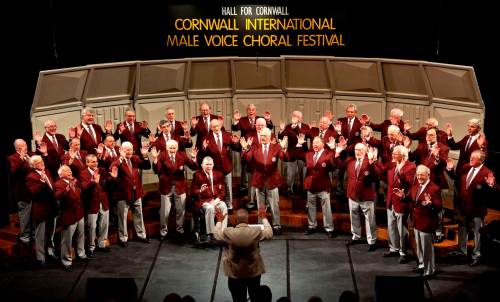 "To give it its full title – the (Seventh) Cornwall International Male Choral Festival – in round figures: 70 choirs, 60 events 50 locations. This has been our main focus for the last few months. Our choir has participated in several ways in all seven of these festivals since 2003. The Festival (29th April – 4th May) was based in Truro as usual, involving major Gala Concerts there but also Regional Gala concerts in major towns from Bude to St. Just and daytime events at many locations. Our main event this year was hosting a Regional Gala Concert at Helston Methodist Church on Sunday 3rd May.
​

Before then, some of us attended symposia, workshops and masterclasses at Newquay. These events provide valuable opportunities to learn something of the latest thinking about voice production, concert programming, presentation (smile!), conducting techniques and so forth. Workshops for us singers may sound like trying to teach old dogs to learn new tricks – but it can be really useful to be forced out of our comfort zones sometimes. Later, some choir members worked at the Cathedral as stewards at the Opening Gala Concert – and were able to enjoy the performances as well.

We were joined in Helston for a Regional Gala Concert by the Sons of Lafayette (Georgia, USA), Westerton Male Choir (Glasgow) and Snowdown Colliery Choir (Kent) for a very successful concert compèred by John Brock. Judging by the applause, the capacity audience enjoyed our choices and the contrasting styles. We were delighted that Dr. Roy Wales, our choir President (and founder of the Festival in 2003) was able to join us from his home in Sussex. The video shows us performing in this lovely and well-appointed venue. We topped off the concert by taking our guests to the Helston Football Club for pasties, saffron cake, beverages and a bit of a sing-along."
To watch the video please click here
Closer to home – we were invited in 1983 to perform 2 or 3 times a year at Falmouth’s Princess Pavilion Monday night concerts. Here in 2017 (after 34 years) we are still doing it! Appearances on TV have extended our range of experience. BBCTV’s Children in Need, two appearances on Songs of Praise and ITV’s How the West was Made (Cornwall, not Dodge City!). Many 2-3 day tours visiting other Choirs have been enjoyable experiences. These are too many to detail here: three trips to 10-choir concerts at the Fairfield Halls (Croydon), Ely Cathedral, several trips to South Wales, East Anglia, Kent, Surrey, Sussex, Lancashire, Staffordshire, Huntingdon and Malta. Most of these tours generate return visits by the hosting choirs. Participation in the 11th Malta International Choir Festival was one of many highlights. We gained third place in this competition and we were also fortunate to be asked to sing in St. John's Co-Cathedral in Valetta. We were also very pleased that we could handle a very difficult test piece - sung in Latin - unaccompanied.
Another way of reaching our public is of course via recordings. Our history covers vinyl, cassette tapes, CDs and now Youtube and Facebook. We have not yet reached the sophistication of digital downloads (for money) – but doubtless this will come. Our CD collection (solely our choir) numbers six. Our most recent recording, Let All Men Sing, celebrating our 70th Anniversary, is shown above. Recordings made with other choirs at festivals and major events number around 25. A remarkable set of recordings of Sankey hymns was made with Stithians Ladies Choir between 1973 and 1992: Sing with Sankey up to Sankey – the Fifth Album. Together they form a collection of 73 hymns – possibly one of the best collections in the world. We regard these recordings as ‘remarkable’ because long after our regular recordings have reached their ‘sell by’ date, the Sankeys are still selling (i.e. in 2017) in UK, USA, South Africa, Tasmania, mainland Australia, Canada and elsewhere. We are not going to win any Golden Discs – but having more copies printed (now digitally re-mastered) has been a regular event for years. 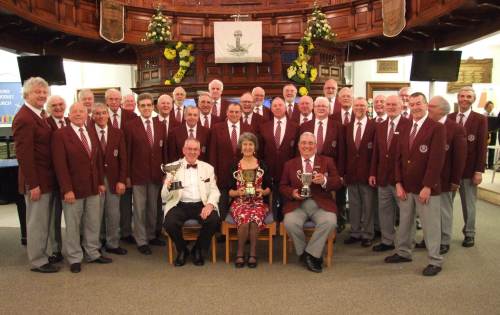 Concerts form the ‘bread and butter’ of the choir’s activities of course. Around about 20 a year would be usual. Twenty-five if one counts Christmas. So a choir member who has done 10 years service will have performed in 250 concerts. It feels like we have sung in more Cornish Methodist Churches and Village Halls than we have hot dinners! Speaking of Choir Members, we recently compiled a ‘Roll Call’ of Singers, Accompanists and MDs since 1947. It totalled 230.

This brief history started with Festivals. To finish – Festival Competitions require a lot of practice and preparation and a degree of panic - but much satisfaction. We have suffered occasional public humiliation, plenty of disappointments but some memorable successes. A bit like Life itself. Four of the trophies shown on the cover of our 2017 CD above were won in one evening at the County Music Festival, Truro 2016. Include the friendship – and it’s been a pretty good 70 years.